Share2
Tweet
Pin
Email
2 Shares
I do not know about you, but when I was a girl, I heard that phrase all too often!  My mom would say, “Go clean your room, Erin!” and I would walk towards my room trying to figure out where that genie in a bottle was.  I just wanted to wish it all clean!  Snap my finger and just see it “Poof!” back into order.

One time when I was quite young I remember my mom telling me that Saint Nick told her to tell me to clean my room.  If I did not clean it, he would come and get me.  I grew up Catholic, so Saint Nick was something we believed in, but I did not believe that he was a physical being, of course, so I dawdled around for awhile.  I was one of those kids that got distracted from my work very easily and I can remember playing with my dolls instead of cleaning.  Besides, I had to see it to believe it.

Then all of a sudden, Whap, whap, whap went a loud noise from the window above my head.  I did not dare look up, I just ran for the closet!!!  I cowered and began pulling all the many articles of clothing and trash over my body to keep myself concealed, hoping he could not see me.  I knew it had to be him but I just could not dare look at the window but I could hear a loud voice, a gruff voice, saying, “Clean your room!!!”

Finally, with my heart pounding, I peered out of a crack in my closet door and I saw him, it was Saint Nick!  He was still pounding and yelling at my window!  Breathing heavily, I just prayed to God, if there was a God, that I would not die.  I seriously thought I would die of fear.  Either that or what if he was so mad he came into my room and found me under my rubble?

I started cleaning my room after I saw he had gone away.  I cleaned it so good and so long that I was sure he would never come back.  I did not want him to ever come and get me.

Years had passed and I grew older.  I figured out that Saint Nick was not real and Mom told me it was her with a mask on.  Yeah, maybe it was good for a few laughs, but she never had to do something that drastic to get my attention again, until I was a teenager!

One day she could take it no longer, because my mother was a clean person.  Everything was clean and in order.  Everything but my room!

She came into my room and said, “I’ve had it with this mess!” She opened my window, which was on the second floor, and just started throwing all my clothing into the driveway from out of my very messy drawers.  And then she said, “It is going to rain soon, so I suggest that you go and pick up that mess and put it back into your drawers the right way.” Ooooooooh I just fumed.  I could not believe she threw it all out my window!  I was crying and throwing a fit, but that sure did not do anything to rescue my clothes that were all over the ground!

I had to run down the steps and out the back door, around the house to find my pile!  I had to make about 20 trips up and down until all the clothes where in a pile in my room.  I had to sort it, fold it, and get it back into the drawers.  I made sure that my drawers were tidy for the next inspection.  Eventually, she had to just shut the door and ignore that I was such a slob and a hoarder.  It was either that or I think she would have seriously threw all of my things in the trash!

You may all sneer and think, “Poor Erin!”  Rather, I like to say, “Poor Mom!”  I can’t believe I was as lazy as I was and I am so thankful that she was willing to get my attention as she did.  It did not change all at once, but I started to get the idea little by little that it is just plain dumb to live like I lived.  I could never find anything and found all kinds of mystery rotted food under my bed, clothes everywhere, and too much stuff.

Here is a video of me cleaning my fancy bedroom at the big white house we were renting.  I filmed it about one month ago while we were packing.  When packing, my room got messy because…okay, I won’t make up some more excuses!  Watch the video and find out how to get your room under control!

I promise I won’t come knocking on your window! 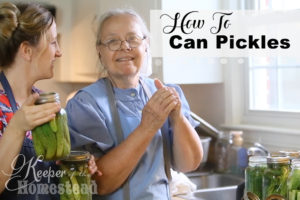 How to Make Pickles

We had quite the prolific garden this year.  I give all the glory to God because it was just unbelievable 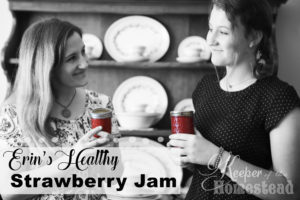 Strawberry jam runs deep in my memory.  I remember Grandma always having her jam that we would slather on top

Read More »
PrevPreviousWhere Do We Go From Here?
NextRenewing our MindsNext

9 thoughts on “Go Clean Your Room!”