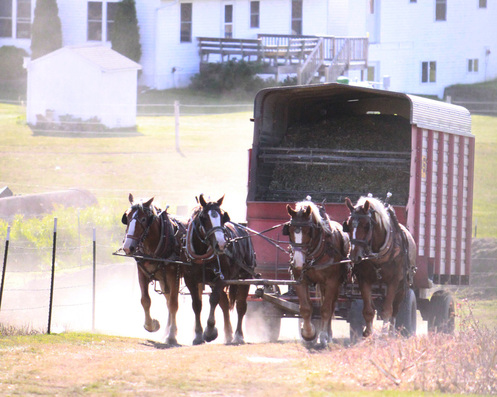 Make Hay While the Sun is Shining

Share
Tweet
Pin
Email
The field work is in full tilt, the hay is being bailed, the corn is being chopped into silage, and the many hours of dedication and team work it takes is incredible.  Hay wagon after hay wagon passes through our yard and the children look on in earnest hope of one day getting the chance to ride along. The strength of the horse team pulling loads, you can see the muscles ripple over their shiny brown coats.  When Joe says whoa they stop and wait.  They put the reigns to the bits of the center horses, knowing they will keep all the others in line.  They are steadfast horses, sure and humble, listening to the soft calls of their master knowing that he leads them rightly.  Mark and Miles have been busily helping the men during this time of great effort.  Mark was asked to haul many loads because Harry and Ezra bought a parcel of land that is miles away from their farm and the horses would wear down quicker having to travel all the distance back and forth.  Here is how it worked:  first, Ezra would drive the team through the corn to chop the silage, round and round the fields.  Next, Mark would back his truck up to the wagon, hitch up, and pull to Harry’s barn over yonder.  After that, Harry was waiting to blow the silage into the tall, tall silos.  Day after day, this team work soon brought the harvest in.  It is sure good to know we can be needed in this community, what ever way we can help.  Some day, Mark would like to learn how to drive the team in the field with the boys, but that takes a lot of time.  When you have never learned how to use horses for work, you must take care because they are powerful animals and even experienced horseman have had a “run away”.  Last year Harry had his team of eight horse coming through a pass.  He had to pull a gate open to drive the team through.  On either side were solar fencers which give a shock to keep the animals in the field.  He was on that load alone, so he told the team to stay as he hopped off to open the gate.  One of the horses was very close to the side and accidently brushed up against it.  Well, it didn’t take long before the entire eight horses were jumping around in shocking jolts.  After little time they were all run away, plowing the disks behind them and ran right over poor Harry.  The only thing he could do as he saw the inevitable, was to throw his body to the side.  Thankfully, the team only ran over his legs, but that was scary enough.  Harry was thanking God for his life that day, for, Harry is a father to 13 children who all live at home.  He just had some sore legs, nothing life threatening, thank the Lord! It was a good lesson learned for us, that horses still have a mind of their own, and when they feel threatened or something unexpected happens, they can run away. 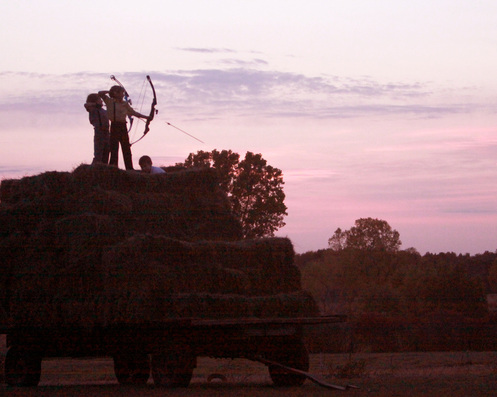 The boys are enjoying the mountain of hay, as they call it, in the yard.  Junior had himself all harnessed up, rapelling down the side, but mostly they shoot their arrows from the tip top.  They have a target down below that they try to group their arrows in.  As much practice as they get, they are getting to be a good shot.  Already Joe’s son, Enos Lee shot and killed a deer in the woods behind our home with his bow.  The woods are full of deer hear, so Miles is hoping to get one this year as well.  It will be a blessing to can all that meat up for the winter.  Joe also has a deer farm.  He sells the big bucks, some 30 points or more! 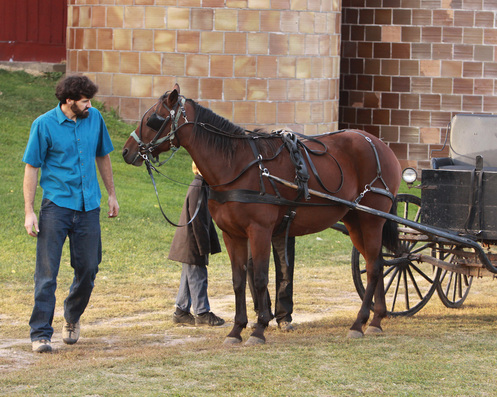 This past week, Miles and I took the buggy out with the kids.  Of course, Miles wanted to drive!  At first, I was just a touch nervous, but after a few paces, I felt like we were safe.  Another Amish man named Joe came up behind us, only he has the fasted horse in the community and he also owns the harness shop.  He went along side us and said with a big smile “Put her in high gear!”  He roared past in his big top buggy and then the race was on.  Our gentle, slow horse thought she needed to keep up with him.  Away she went at a fast trot.  I grabbed the reigns from Miles and slowed her down.  We just wanted to go slow and enjoy the scenery, we feel safer that way for now at a moderate pace.  We made it to Harry’s farm where Mark was hauling loads.  Harry has an egg farm (3000 organic free range chickens), organic poultry fryers, dairy farm (40 head of holstein organic cows), produce, and other odds and ends.  You can imagine that with 13 kids, the work can get done fast.  Edna Mae, Harry’s wife, was in the wash house canning tomatoes.  Our purpose was to get a case of eggs and to get a coat pattern from Edna Mae.  It is soon going to be cold, and all the children need coats.  I will sew them on my treadle sewing machine using some thick thinselate and black denim.  It will be done in the same style as the Amish have, of course.  I can’t wait to make our own coats.  First, I will have Orpha Yoder sew one with me and after that, I will be good to go.  I learn quick if I see things done one time.  Harry’s whole family just smiled as they saw us on that carriage.  They really think it is neat that we have our own buggy horse.  Harry’s boy, Nelson, taught Miles a new trick while we were there.  He taught him how to use his suspenders as a sling shot to shoot stones with.  That was funny.  We had a nice slow ride home and watched the sun set.  That was just heavenly, indeed! 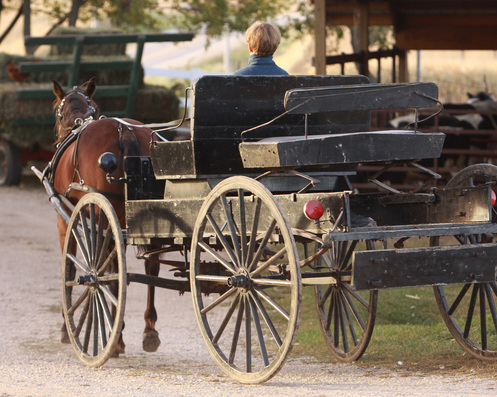 Miles asked Joe from the harness shop if he could work for FREE, on Saturdays to learn all about harness working.  Joe thought it would be great, so yesterday morning Miles proudly hitched up the horse and road 4 miles to the harness shop and worked hard all day cleaning harnesses and learning a lot along the way.  We went to visit him with my dad, and it was really neat to see all the tools they use and to smell all the leather.  Joe even gave Miles a new brush and hoof pick for helping because Miles wants to be a really good horseman and look after that horse with all his care.  Miles discovered some sores in her ears, so he is massaging them each day and putting some healing salve in them.  Abby, the buggy horse, is enjoying the extra attention to her needs.
It was also Molly’s 12th birthday.  She wanted to make a German Chocolate Cake from scratch for the first time ever.  It was a huge undertaking, but worth all the effort.  First, we biked over to the Lark store to get a few grocery items for the cake.  It was a crisp morning here and the fall colors are peak.  We enjoyed the cool breeze as we peddled down the lane.  My mother and father met us at the store, and they were able to find a few things, too.  After our ride home, Molly began the cake making.  Her fingers flew as she separated egg yokes, mixed things, and melted chocolate.  It was just beautiful to see our daughter so capable and the cake was out of this world.  It was a 3 layered round cake with homemade coconut pecan caramel frosting between the layers.  We are so thankful for our 12 years with Molly.  She is just a treasure to us.
Share
Tweet
Pin
Email
Share
Tweet
Pin
Email 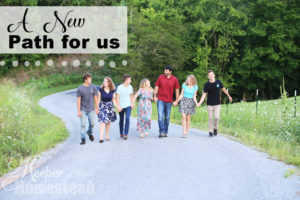 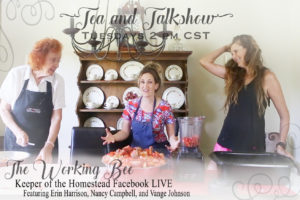 1 thought on “Make Hay While the Sun is Shining”